JUST Egg French Toast is made with JUST Egg, a vegan liquid egg replacement. It's mixed with dairy-free half and half, pure maple syrup, vanilla and spices for a sweet and creamy custard. The outside is crisp and the center is creamy and delicious. There are so many warm flavors that pair so well together in this recipe, and you'd never guess that it's not only dairy free, but vegan!

If you need other egg-free breakfasts, try my recipe for Chocolate Baked Oatmeal or my Overnight Oats with Frozen Fruit. They're both delicious and high fiber and protein options. They are also easy to prep ahead of time for a quick grab-and-go breakfast in the morning.

👍Why this Recipe Works

❓What is JUST Egg?

JUST Egg is an egg alternative that resembles liquid eggs. With it, you can make scrambled eggs, omelettes, breakfast sandwiches, French toast, use it in recipes that require dredging (such as breaded or fried foods), or even in baked goods. It's perfect for people who have an egg allergy/sensitivity or for those are vegan and do not consume eggs.

💰Where to buy JUST Egg

You can find it in stores like Walmart, Target, Kroger and health food stores such as Whole Foods.

Bread: I like to use artisan style bread. I purchase the Sara Lee Artisano bread because the slices are thick, which is desirable for French toast!

Dairy-free butter: If you're using a good non-stick skillet, you really won't need much of this--if any.

In a large and shallow dish, such as a pie dish, mix together the ingredients for the custard.

Using a large non-stick pan, turn the heat up to about medium and rub the pan with the dairy-free butter.

When the pan is hot, quickly soak one piece of bread at a time, covering both sides with the custard. You want to do this part quickly because soaking the bread too long will result in mushy French toast that doesn't flip as well.

Cook each side for about 3 to 4 minutes.

If the French toast is sticking to the pan, it's either because it's not ready to be flipped, the heat is too high or there's not enough butter in the pan. Make sure to butter the pan as needed throughout the cooking process. If you're using a good non-stick pan, this shouldn't be much of a problem.

Bread: It is preferred to use bread with thick slices. I use a thick sliced artisan style bread. If you want to take your French toast to the next level, don't use traditional sandwich bread. If you can find a vegan Challah or brioche bread, those would work great. I would also recommend using a homemade loaf that you can slice yourself. Some even use a vegan sourdough bread. If you're gluten free, you can use sliced gluten free bread!

Dairy-free butter: Olive oil spray will work in place of the butter.

Fruit: Use your favorite fresh berries such as strawberries, raspberries, blueberries or even black berries for toppings.

Powdered sugar: I use a confectioner sugar substitute called Swerve Ultimate Sugar Replacement. You can find it at Walmart or on Amazon!

Dairy-free whipped cream: If you want some extra sweetness and cream, Reddi Wip makes a delicious whipped cream with coconut milk that I love to use. You can use whatever non-dairy brand you like best.

You should use a good non-stick skillet. While you can make this recipe in a cast iron skillet, it's not recommended because it sticks more and you'll have to use a lot more butter in between flipping and cooking.

A pie dish, large shallow bowl or an 8 by 8 square pan will work for dipping the bread into the wet mixture.

While this French toast is best enjoyed fresh, you can store in the refrigerator in an airtight container for up to 2 days.

What is the best type of bread to use for French toast?

A vegan brioche, challah or a homemade loaf that you can slice yourself. You want a bread that is sliced thick.

Why is my French toast soggy?

How long should you soak French toast with JUST egg?

Just until each side has been coated. This should be a very quick process! It should go on the skillet immediately after it's been soaked.

How much JUST Egg is equal to 1 egg?

3 tablespoons of JUST Egg is equal to 1 egg.

Yes! It's also the closest in taste and texture to a real egg.

⭐️Before you go! If you enjoyed this recipe for my JUST Egg French Toast, leave a review and comment down below to share it with me! I love to hear from you. Also, if you aren't following me on Instagram, search @thedairyfreemenu for some more cooking inspiration! 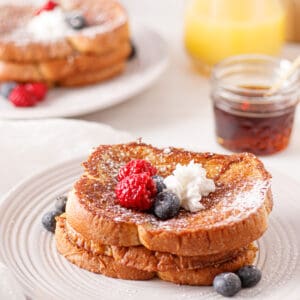 Note: The nutrition label is only an estimate. Amounts may vary. The cooking times for the entire batch will vary depending on how many pieces of French toast you cook at once.

Get the Brunch Pro Theme

Did you make this recipe? Let me know! Cancel reply

I make delicious food that just so happens to be dairy free. It's my goal to help make you excited about what you can eat! So here's a menu of options. Enjoy!

We use cookies on our website to give you the most relevant experience by remembering your preferences and repeat visits. By clicking “Accept”, you consent to the use of ALL the cookies.
Cookie settingsACCEPT
Manage consent

This website uses cookies to improve your experience while you navigate through the website. Out of these, the cookies that are categorized as necessary are stored on your browser as they are essential for the working of basic functionalities of the website. We also use third-party cookies that help us analyze and understand how you use this website. These cookies will be stored in your browser only with your consent. You also have the option to opt-out of these cookies. But opting out of some of these cookies may affect your browsing experience.
Necessary Always Enabled
Necessary cookies are absolutely essential for the website to function properly. These cookies ensure basic functionalities and security features of the website, anonymously.
Functional
Functional cookies help to perform certain functionalities like sharing the content of the website on social media platforms, collect feedbacks, and other third-party features.
Performance
Performance cookies are used to understand and analyze the key performance indexes of the website which helps in delivering a better user experience for the visitors.
Analytics
Analytical cookies are used to understand how visitors interact with the website. These cookies help provide information on metrics the number of visitors, bounce rate, traffic source, etc.
Advertisement
Advertisement cookies are used to provide visitors with relevant ads and marketing campaigns. These cookies track visitors across websites and collect information to provide customized ads.
Others
Other uncategorized cookies are those that are being analyzed and have not been classified into a category as yet.
SAVE & ACCEPT