I love everything about a nice warm, gooey, traditional cinnamon roll. However, I don't exactly enjoy how it makes me feel afterwards. Ya know that sugar-overload feeling? They're typically high in refined sugars, which is something I try to avoid when baking. I really wanted to have it both ways here. A sweet, traditional tasting cinnamon roll that makes me feel good after eating it. I bring you my healthy cinnamon rolls!

But first, here is a fun fact! I just very recently learned that the origin of cinnamon rolls is said to be in Sweden. In fact, they even celebrate with a Cinnamon Roll Day every year on October 4th. It was actually a day created for marketing purposes in 1999. Whatever the reason may be, you can't go wrong with celebrating cinnamon rolls!

This post contains affiliate links. I may earn commission from qualifying purchases at no additional cost to you. I will never recommend a product I don't use or trust. Thank you for your support

Medjool dates- I love this brand because they're the softest I've used! I always try to pick out the softest ones from the pack when making a date paste so that they blend even better!

The filling is a smooth cinnamon date paste. It's a perfect, naturally sweet filling! Dates might be high in sugar, but they are classified as a complex carbohydrate. This means that it's low on the glycemic index. It's digested slowly, so it raises your blood sugar slowly, unlike simple carbohydrates that do the opposite. They are not only delicious and sweet-- they are nutritious!

While I LOVE my Vitamix, I found that my magic bullet blender does the BEST job for smaller jobs like blending date paste. In my Vitamix, the paste normally sits under the blades because it's a small amount. It gets it so nice and smooth with this!

I think I really nailed the frosting. I asked my picky eater of a husband if he thinks I should change the frosting and even he suggested I keep it! Believe me, that means something coming from him!

How to Store these Healthy Cinnamon Rolls

The cinnamon rolls can be stored at room temperature, covered for about 1-2 days. After that, you can transfer them to an airtight container so that they will last a bit longer. 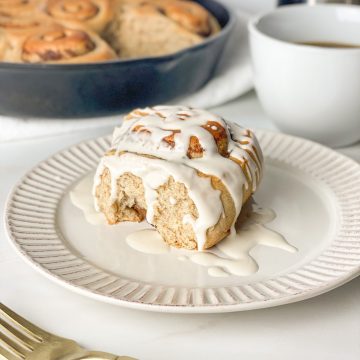 Back to the Dough

Because the frosting contains unsweetened plain coconut yogurt, it needs to stay refrigerated. It keeps nicely refrigerated. Also make sure you store it covered.  IMPORTANT NOTE:  because the frosting has tapioca starch (or corn starch if you use it instead), it can gel up in the microwave, making it no longer frosting-like. You can drizzle it on a roll and briefly microwave it that way. The part that is on the roll shouldn't gel up, as long as it doesn't get overheated. But the drippings on the plate will turn to a rubbery gel. Its best to serve it on a warm roll without heating it!  The rolls can be stored covered, airtight, at room temperature for 1-2 days, then can be transferred to an airtight container and placed in the refrigerator to last longer. Since the frosting needs to be refrigerated, I would frost one warm roll at a time
Keyword cinnamon rolls, dairy free, healthy cinnamon rolls, refined sugar free, vegan
Tried this recipe?Let us know how it was!

**Note: Nutrition label is only an estimate. Amounts may vary. Label does not include frosting.**

Did you make this recipe? Let me know! Cancel reply

We use cookies on our website to give you the most relevant experience by remembering your preferences and repeat visits. By clicking “Accept”, you consent to the use of ALL the cookies.
Cookie settingsACCEPT
Manage consent

This website uses cookies to improve your experience while you navigate through the website. Out of these, the cookies that are categorized as necessary are stored on your browser as they are essential for the working of basic functionalities of the website. We also use third-party cookies that help us analyze and understand how you use this website. These cookies will be stored in your browser only with your consent. You also have the option to opt-out of these cookies. But opting out of some of these cookies may affect your browsing experience.
Necessary Always Enabled
Necessary cookies are absolutely essential for the website to function properly. These cookies ensure basic functionalities and security features of the website, anonymously.
Functional
Functional cookies help to perform certain functionalities like sharing the content of the website on social media platforms, collect feedbacks, and other third-party features.
Performance
Performance cookies are used to understand and analyze the key performance indexes of the website which helps in delivering a better user experience for the visitors.
Analytics
Analytical cookies are used to understand how visitors interact with the website. These cookies help provide information on metrics the number of visitors, bounce rate, traffic source, etc.
Advertisement
Advertisement cookies are used to provide visitors with relevant ads and marketing campaigns. These cookies track visitors across websites and collect information to provide customized ads.
Others
Other uncategorized cookies are those that are being analyzed and have not been classified into a category as yet.
SAVE & ACCEPT